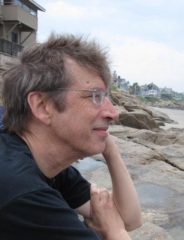 Dale Hobson writes in and about the Adirondack North Country of New York State. As web manager at North Country Public Radio he created and edited Books by Email, a serial presentation of complete new and forthcoming books by authors of the region. He hosted an occasional broadcast/podcast feature Giving Voice, showcasing poets in performance and interview, was an occasional co-host of Readers & Writers on the Air, a monthly call-in on contemporary literature, and wrotes a weekly column for the NCPR newsletter The Listening Post. Previous publications include the chapbooks Nickelodeon, Second Growth and The Water I Carry. A Drop of Ink is his first full-length collection of poetry. His second full-length collection, Light Year, illustrated by Suzanne Langelier-Lebeda, was released in August 2019.

He shares a home on Sugar Island Flow in Potsdam, New York with his wife, Terry de la Vega. They have a daughter, Elena, living in Boston, MA.