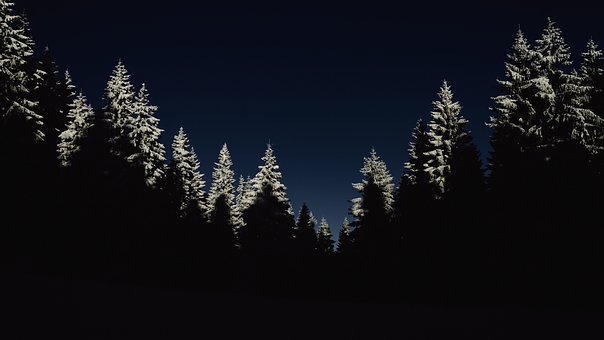 Calling it cold doesn’t quite cover it. One more night into the double-digits below zero and then finally the temperatures will start to go back up. It’s been a long time to just call it a “snap.” Mostly, folks just hunker down or venture out only as far as the drive to start the car – (if it will start) – then back in to warm up while the engine warms up, too.

But it can also have a mysterious allure, especially at night, in the clear air under the big moon, that can draw one out the door. Here’s a new poem for a bone-cold night.

I walk out into dope-slap cold
clad in a space-suit of layers
under sparking stars, bold
beside an arc lamp moon.
All silent, but for creaking snow
and cracking trees which loom,
making unintelligible gestures,
black against midnight blue.

Somewhere I saw it written,
in the hieroglyphs of frost
which crept across the window,
in the snow code mice write
in panic under shadow
of the owl. Some message only
moonlight unveils, only walking
wakes, only cold makes plain.

Breathing daggers, exhaling smoke,
I shamble across the back yard
casting about for the arcane sign,
to find a doe a-shiver in the sumac
who startles back into pine.
Startled, too, I step back toward
the distant porch light’s shine.
I could catch my death out here.